My professional interests are in the field of climate change and climate variability on time scales ranging from seasonal-interannual (for example, El Nino), centennial (global warming), to glacial-interglacial cycles (hundreds of thousands of years). My approach is to study the Earth system as a whole, focusing on the interactions among the atmosphere, the hydrosphere and the biosphere. A particular interest is the global carbon cycle, a key component of Earth's grand biogeochemical cycles. My tool box includes computer models, data analysis, experiments and field work. I also conduct research in the technical solutions and policy implications of climate change, including renewable energy and carbon sequestration. 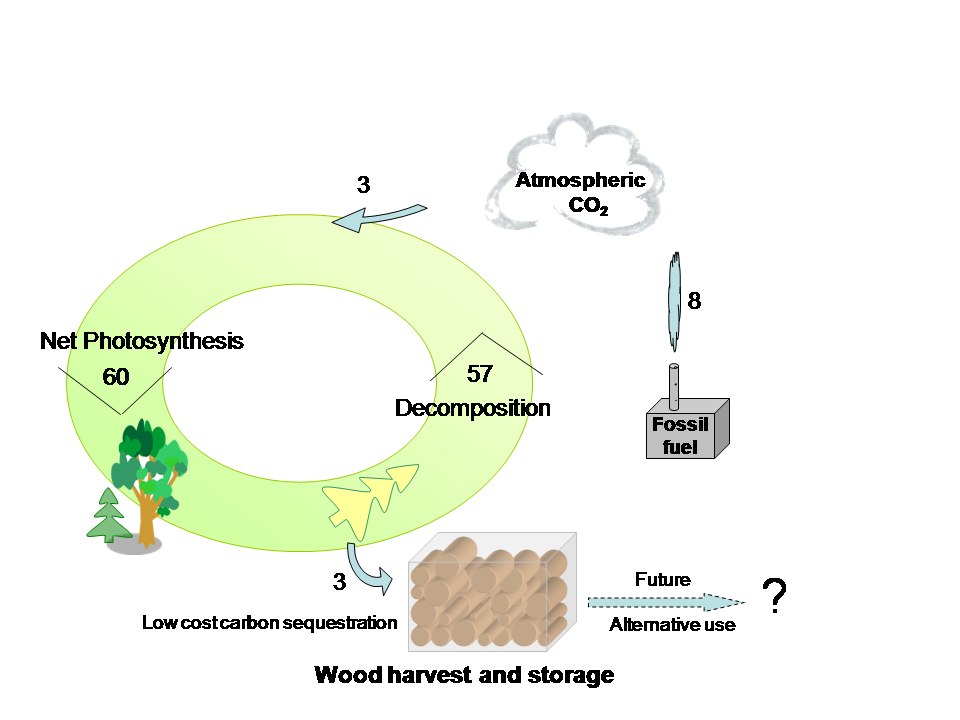 Earth safe from dangerous climate change, a large amount of CO2 will need to be removed from the atmosphere and stored away semi-permanently via negative emissions technologies, for example: planting trees. But planting trees is not enough. The natural carbon cycle is in near balance. In an established forest, some trees absorb a large quantity of CO2, but other trees die, decay and release carbon back into the atmosphere. The idea of Wood Harvesting and Storage (WHS) proposes management intervention by tree harvesting or waste wood collection, followed by secure storage in engineered structures called Wood Vaults to prevent decomposition, with a durability of thousands of years or longer. Because the forest as a whole is still maintained and continues to absorb CO2, the net effect is to remove CO2 from the atmosphere. It is estimated that the potential for sustainable long-term carbon sequestration using WHS is 0.5-3 GtC/y (2-10 GtCO2/y), with the upper range being one-fourth of our current fossil fuel emission rate. Demo projects conducted so far show a durability of hundreds to thousands of years, and a cost of $10-50 per metric ton of CO2 sequestered. Specific applications can have synergy with waste management, fire risk reduction, mine remediation, as well as extending the benefit of reforestation. The technique is low-cost, distributed, easy-to-monitor, safe and creates green jobs, thus providing an option in the toolbox of climate mitigation and adaptation strategies. Early research can be found at Zeng (2008) and Zeng et al. (2013). See In the News for media stories and comments. Further discussion can be found in the seminar given at the Eni Foundation (PDF file of the 45min talk). The idea is now being put into practice commercially in the burgeoning industry of Carbon Dioxide Removal by the Carbon Lockdown Project and by a community of people, while opening a new area of research. See Zeng and Hausmann (2022)for newest insight on Wood Vault engineering and science. 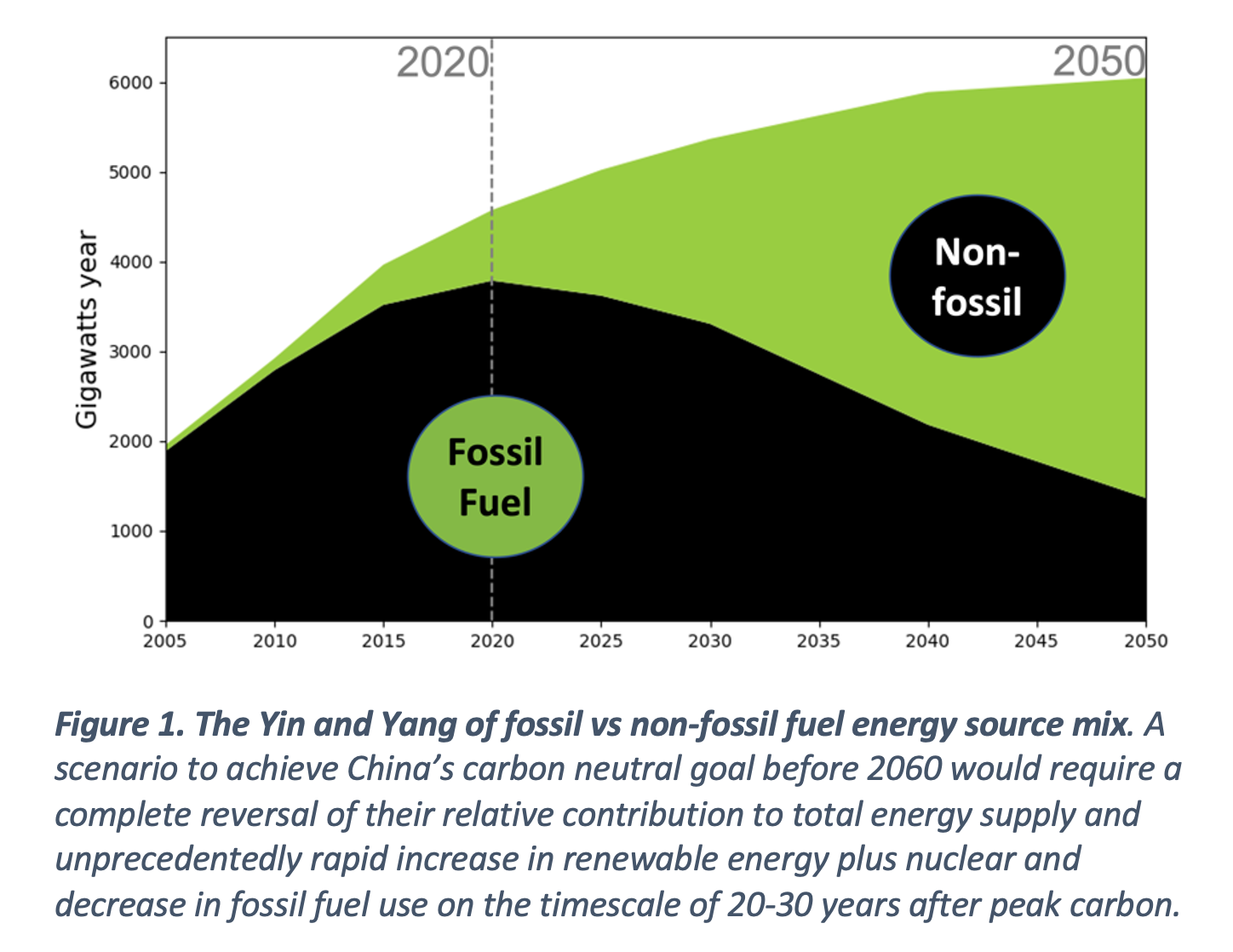 On 22 September 2020, within the backdrop of the COVID-19 global pandemic, China announced its climate goal for peak carbon emissions before 2030 and to reach carbon neutrality before 2060. The planning effort is now in full swing in China, known as the 'double-carbon goal', but the pathway to decarbonization is unclear. The needed transition towards non-fossil fuel energy represents a "Yin to Yang reversal" (Fig.1): the challenges are enormous. Analysis of four representative scenarios shows significant differences in achieving the carbon-neutral goal, particularly the contribution of non-fossil fuel energy sources. The high target values for nuclear, wind, and bioenergy would approach their corresponding resource limitations, with solar energy being the exception, suggesting solar's critical role. We also found that the near-term policies that allow for a gradual transition, followed by more drastic changes after 2030, can eventually reach the carbon-neutral goal and lead to less of a reduction in cumulative emissions, thus inconsistent with the IPCC 1.5C scenario. The challenges and prospects are discussed in the historical context of China's socio-economic reform, globalization, international collaboration, and development. Zeng, N., K. J. Jiang, P. F. Han, Z. Hausfather, J. J. Cao, D. Kirk-Davidoff, S. Ali, and S. Zhou, 2022. Also see an earlier work that first suggested the strategy for China to Peak Carbon by 2030.

Over the last few decades, the scientific community has been developing carbon information systems with the aim of monitoring and verification of emissions reduction goals. In a paper published in Environmental Research Letters, Zeng et al. (2021) found that the carbon satellite GOSAT detected a faint signal in the Northern Hemisphere during the spring of 2020 at the height of COVID lockdown, on the backdrop of large CO2 variability due to biosphere and weather variability, which swamps regional CO2 signal. However, COVID can manifest itself in cities where major emissions originate as CO2 reduction of 20-50 ppm can be observed on roads (Figure inset: CO2 along the major roads of Beijing before, during and after COVID lockdown in 2020) or even city wide. Such observations were made possible by low-cost smart sensor network and mobile platforms built with the Internet of Things (IoT) approach (Martin et al., 2017; Liu et al., 2021)

and thus mitigate anthropogenic climate change. But is this its only benefit? In a paper published in Science,Li et al. (2018) conducted experiments using a climate model to show that the installation of large-scale wind and solar power generation facilities in the Sahara could cause more local rainfall, particularly in the neighboring Sahel region. This effect, caused by a combination of increased surface drag and reduced albedo, could increase coverage by vegetation, creating a positive feedback that would further increase rainfall. The work used the UMD-ICTP Earth system model. A key process, vegetation-albedo-climate feedback, sometimes known as the 'Charney hypothesis', played out in the opposite direction and has been found to have exacerbated the 1970-80s drought in the Sahel. Zeng et al. (1999, 2003) 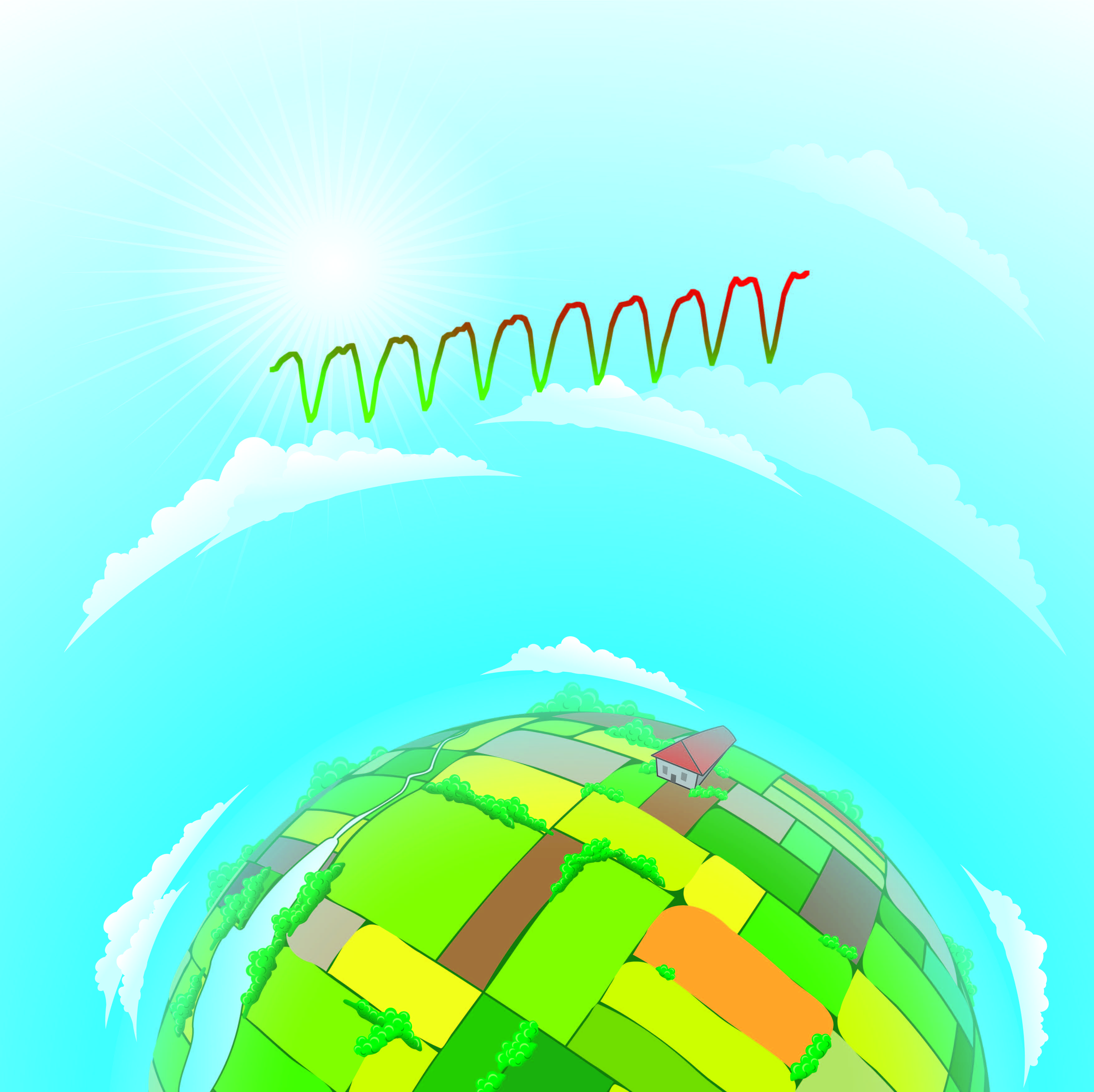 only a long-term increase due to fossil fuel emissions and land use change, but also a prominent seasonal cycle whose amplitude is larger than annual fossil fuel emissions, and it has also been increasing over the last 5 decades. Pioneers including R. Bacastow and C. D. Keeling had pondered on these changes. Because the CO2 seasonal oscillations are largely due to the growth and decay of the biosphere, dominated by the Norhtern Hemisphere vegetation, they hypothesized that better vegetation growth due to warming in the high latitude regions and more CO2 'fertilization' may be the reason for the increase in the CO2 seasonal amplitude. In a Nature paper,Zeng et al. (2014) suggests yet another factor, the agricultural Green Revolution. At the height of the growing season, in major crop regions around the world such as the US midwest cornbelt and Eastern China, extraordinarily high photosynthsis rates draw down CO2 from the atmosphere, leading to a deeper and deeper minimum at the end of growing season. Some media coverage can be found here, including a Nature commentary. In a companion paper, Zhao and Zeng (2014) found that the IPCC AR5 carbon-climate models project this trend to continue into future.

The fate of the Amazon rainforest will be determined by two key factors: trends of deforestation and climate change. The suggestion of a possible climate change induced forest dieback has raised considerable interest as well as controversy. We analyzed 24 IPCC model future climate projections under the A1B scenario and simulated their impacts with a dynamic vegetation model. Our results suggest that the core of the Amazon rainforest should remain largely stable as rainfall in the core of the basin is projected to increase in nearly all models. However, the periphery, notably the southern edge of Amazonia and further south into central Brazil (SAB), are in danger of soil moisture loss and vegetation change, driven by two main processes: (1) subtropical drying during its dry season due to a combination of circulation and SST changes, when vegetation needs water most even though the annual mean rainfall may not change significantly; (2) evaporative soil moisture loss in a warmer world. Southern Amazonia is currently under intense human influence as a result of deforestation and land use change. Should this direct human impact continue at present rates, added pressure to the region's ecosystems from climate change may subject the region to profound changes in the 21st century. Details can be found at Cook et al. (2012). Similar Atlantic SST gradient pattern has been shown to cause the severe 2005 Amazon drought (Zeng, et al., Best of the year 2008 at Environmental Research Letters).

Many subtropical regions are expected to become drier due to climate change. This will lead to reduced vegetation which may in turn amplify the initial drying. Using a coupled atmosphere-ocean-land model with a dynamic vegetation component that predicts surface albedo change, here we simulate the climate change from 1901 to 2099 with CO2 and other forcings. In a standard IPCC-style simulation, the model simulated an increase in the world's "warm desert" area of 2.5 million km squared or 10% at the end of the 21st century. In a more realistic simulation where the vegetation-albedo feedback was allowed to interact, the "warm desert" area expands by 8.5 million km2 or 34%. This occurs mostly as an expansion of the world's major subtropical deserts such as the Sahara, the Kalahari, the Gobi, and the Great Sandy Desert. It is suggested that vegetation-albedo feedback should be fully included in IPCC future climate projections. Zeng and Yoon (2009)

A rare drought occurred from 1998 to 2002 across much of the Northern Hemisphere midlatitude regions. Using observational data and numerical models, we analyze the impact of this event on terrestrial ecosystem and the global carbon cycle. The biological productivity in these regions were found to decrease by 0.9 PgC/y or 5% compared to the average of the previous two decades, in conjunction with significantly reduced vegetation greenness. The drought led to a land carbon release that is large enough to significantly modify the canonical tropically dominated ENSO response. This large CO2 source explains the consecutive large increase in atmospheric CO2 growth rate of about 2 ppmv/y in recent years, as well as the anomalous timing of events. Zeng, Qian, Roedenbeck and Heimann (2005).

Only 21,000 years ago, large parts of the Northern Hemisphere were covered under giant icesheets. Today, the mystery of the glacial-interglacial cycles remains unsolved. Apart from important roles astronomical orbital forcing may play, it is becoming increasingly clear that CO2-climate interaction is a key component. Zeng (2003) hypothesized a mechanism in which organic carbon buried under the icesheets may be a `missing link' in the ice-age story. Zeng (2007) further proposed a mechanism where internally generated quasi-100ky cycles could be triggered by subglacial burial carbon release as large icesheets such as the Laurentide grow long and large enough and the basal melting ejects burial carbon into the atmosphere, thus starting a carbon-climate-icesheet feedback that could explain such as the deglaciation at Termination II. 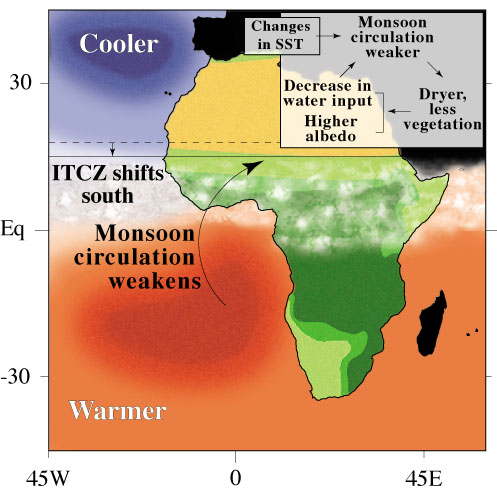 The Sahel, a semiarid region in West Africa between the Sahara desert and the Guinea coast rainforest, has experienced an unprecedented drought in recorded history since the late 1960s. The drought had a devastating impact on this ecologically vulnerable region and was a major impetus in the establishment of the United Nations Convention on Combating Desertification and Drought. In a perspective article in the journal Science, Zeng (2003) explains our current understanding of the problem, while Zeng et al. (1999) explores the relative roles of sea surface temperature, land and vegetation feedbacks. Additionally, a series of papers explore the nonlinear dyanmics of vegetation-atmosphere interaction in desert-forest transitions.